Hang in There Bernie! Abe Ran Against the Slave-owners (Hillary) and Stephen Douglas (Trump) to Win the 1860 Election with 40% of the Vote. Let Abe be with “Not Me, Us.”

“LET US HAVE FAITH THAT RIGHT MAKES MIGHT, AND IN THAT FAITH, LET US, TO THE END, DARE TO DO OUR DUTY AS WE UNDERSTAND IT,” Abe Lincoln’s Cooper Union Address, New York, New York, February 27, 1860

In October 1859 Abraham Lincoln accepted an invitation to lecture at Henry Ward Beecher’s church in Brooklyn, New York, and chose a political topic which required months of painstaking research. His law partner William Herndon observed, “No former effort in the line of speech-making had cost Lincoln so much time and thought as this one,” a remarkable comment considering the previous year’s debates with Stephen Douglas.

An eyewitness that evening said, “When Lincoln rose to speak, I was greatly disappointed. He was tall, tall, – oh, how tall! and so angular and awkward that I had, for an instant, a feeling of pity for so ungainly a man.” However, once Lincoln warmed up, “his face lighted up as with an inward fire; the whole man was transfigured. I forgot his clothes, his personal appearance, and his individual peculiarities. Presently, forgetting myself, I was on my feet like the rest, yelling like a wild Indian, cheering this wonderful man.”

With a deft touch, Lincoln exposed the roots of sectional strife and the inconsistent positions of Senator Stephen Douglas and Chief Justice Roger Taney. He urged fellow Republicans not to capitulate to Southern demands to recognize slavery as being right, but to “stand by our duty, fearlessly and effectively.”

New York State in the 2016 Primary Election is Abe Lincoln’s 1860 Election battle. Sometime ago we divided the country into Red States and Blue States based on their vote in presidential election years. Red’s for the Republicans and Blue Democrats. These are further color coded by county, zip code and electoral vote count.

Trump is my Stephen Douglas character representing the roots of sectional strife: racism, religion, and above all income inequality. Hillary is the poster child for the slave owners, today known as Crony Capitalists. Bernie is the second coming of Lincoln who shouts across the river, to “stand by our duty, fearlessly and effectively,” end the corporate oligarchy that enslaves Americans regardless of race, creed or sexual orientation.

Bernie won New York in all the rural counties. Teachout a shinning star preaching the organic farming breakup Big Ag philosophy did well against Cuomo in 2014 and is running for Congress in 2016. 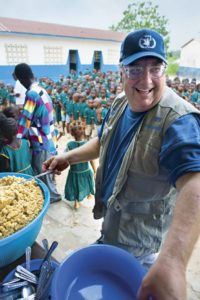 Howard Graham Buffett serving meals in Sierra Leone in 2007. He spends up to 200 days a year on the road, doing foundation work. (Jeannie O’Donnell / The Howard G. Buffett Foundation)

Howard, Warren Buffett’s farmer son, is one man, a rich one man, working in all 54 African countries developing sustainable farming on the continent with the biggest problems in hunger, poverty, soil, infrastructure, economics and politics. Howard’s dad is bridge buddies with Bill Gates who is also saving Africa. There is hope in 2016 that the Bern fires up the base like Teddy Roosevelt and FDR, while the well informed Buffett Gates partnership puts their money where it’s needed – like not in Panama.

“USAID and others have been at this for decades,” he said. “By now, according to projections, we should have ended hunger. So my point is, what we’re doing isn’t working.”

“Don’t get me wrong,” Buffett told me. “I’m a farmer. I know what I can get from improved seed. I know what I get from fertilizer. They’re huge. But technology can’t build organic matter. It can’t create topsoil. It can’t magically protect water quality. It’s a quick fix, and Africa needs a long-term solution.”

Instead of a green revolution for Africa, Buffett favors what he calls a “brown revolution,” or, to quote the distinguished agricultural ecologist Sir Gordon Conway, a “doubly green revolution”—a focus on environmentally sustainable agriculture that minimizes erosion, preserves and regenerates soil, and makes the land more resilient, while also increasing yields. In contrast to the green revolution, the brown revolution is a tortoise-like approach: Its impact is gradual. Over the past decade, patiently, the Howard G. Buffett Foundation has spent hundreds of millions of dollars to identify and promote practical, low-cost methods of conservation farming—cover crops, no-till farming, locally bred seed varieties—that improve African soil quality and crop yields without chemical fertilizers and costly imported seeds. “If you take a place like Africa,” Buffett told me, “where they have the most degraded soils in the world, very limited nutrients, ground that is farmed to death—literally to the point where you have to move on and farm another piece of ground—and all you’re doing is throwing on synthetic fertilizer, it’s like trying to put an oxygen mask on a cadaver and expecting it’s going to start breathing again.”

The foundation owns and operates four research farms—4,400 acres in Decatur, 1,000 acres in Nebraska, 3,900 acres in the high desert of southeast Arizona, and the farm in South Africa, spanning 9,200 acres—where scientists from Texas A&M, Penn State, and Purdue are conducting experiments on how best to grow crops in places with little water and poor soil. In South Africa, the foundation is testing 14 different cover crops—among them cowpea, lablab, and pigeon pea—to learn which ones best reduce erosion and improve soil fertility. In Arizona, the foundation replicates the conditions faced by poor African farmers: drought, little or no fertilizer, oxen tilling the land. Tests are under way to measure the precise relationship between water and crop yields. http://www.theatlantic.com/magazine/archive/2016/05/how-warren-buffetts-son-would-feed-the-world/476385/

An upstate Penn Yan, New York farm family is mastering the art of growing organic grain. They want to share their knowledge with the world.

For more than 20 years, the Martens family—Klaas, Mary-Howell, and their son Peter—has pioneered organic and sustainable farming on their farms and accompanying feed mill, Lakeview Organic Grain. Customers throughout the Northeast know them for their grains, regional farmers prize their organic feed, and celebrity chef Dan Barber uses their rotating crops in his seasonal risotto. The Martens farm is a living lab where they study how their soil can best support such non-indigenous crops as kiwis. Mary-Howell Martens, Klaas’s wife, promotes their agricultural techniques on a USDA advisory committee.

As they began paying closer attention to their soil, they introduced a greater variety of crops to their fields. The first time they planted organic crops, 10-foot-tall velvetleaf weeds appeared in their fields. But every year after that, the weeds weakened, finally succumbing to a fungal disease that they had cleverly encouraged. While the weeds withered in the Martens’ fields, they still flourished in neighboring farms. According to an agricultural researcher at Cornell, the Martens farm was the only one where conditions were created that favored the crops over the weeds.

Their quiet victory over velvetleaf was just one among many successes that helped to wear down their neighbors’ skepticism about sustainable practices. They were the first farm in their area to grow organic crops. Today, they are surrounded by 20 other organic farms.