Cry not for Turkey – they didn’t get in the European Union, the Euro and a Greek like collapse. They joined the wrong side, the German side, the losing side in WWI and won their independence. Turkey lost their Ottoman Empire that stretched from Baku to Venice, but was relieved of all Arabic speaking nation-states. After Ataturk, put the ABC’s in the Turkish language, the country became the Geo-political Rosetta Stone of the Mid-East.

Today the East (China) meets the West in Istanbul with their One Belt One Road Initiative. Railroads and pipelines, instead of camels, boats and planes are the new modes of transportation. Nobody likes nobody today, tomorrow or yesterday but they all like money. Egypt accepts everybody’s money that uses their Suez Canal. The same thing goes on in Panama, so much so, that China is building another canal in Nicaragua. 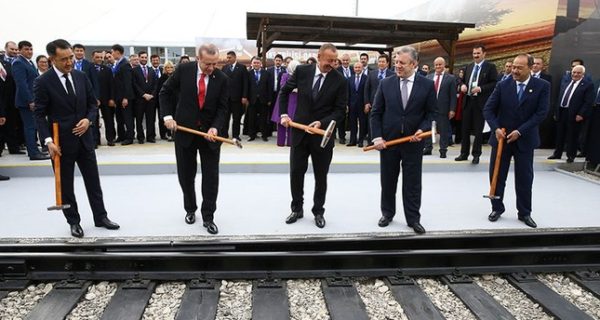 Now comes the Baku-Tblisi-Kars (BTK) railway – inaugurated with great fanfare by Erdogan alongside Azerbaijani President Ilham Aliyev and Georgian Prime Minister Giorgi Kvirikashvili, but also crucially Kazakh Prime Minister Bakhytzhan Sagintayev and Uzbek Prime Minister Abdulla Aripov. After all, this is about the integration of the Caucasus with Central Asia.

Erdogan actually went further: BTK is “an important chain in the New Silk Road, which aims to connect Asia, Africa, and Europe.” The new transportation corridor is configured as an important Eurasian hub linking not only the Caucasus with Central Asia but also, in the Big Picture, the EU with Western China.

The Baku-Tblisi-Ceyhan (BTC) pipeline, a deal brokered in person in Baku by the late Dr Zbigniew “Grand Chessboard” Brzezinski, was a major energy/geopolitical coup by the Clinton administration, laying out an umbilical steel cord between Azerbaijan, Georgia and Turkey.

BTK is just the beginning, considering the long-term strategy of Chinese-built high-speed rail from Xinjiang across Central Asia all the way to Iran, Turkey, and of course, the dream destination: the EU. Erdogan can clearly see how Turkey is strategically positioned to profit from it.

Of course, BTK is not a panacea. Other connectivity points between Iran and Turkey will spring up, and other key BRI interconnectors will pick up speed in the next few years, such as the Eurasian Land Bridge across the revamped Trans-Siberian and an icy version of the Maritime Silk Road: The Northern Sea Route across the Arctic.

What’s particularly interesting in the BTK case is the Pipelineistan interconnection with the Trans-Anatolian Gas Pipeline(TANAP), bringing natural gas from the massive Azeri gas field Shah Deniz-2 to Turkey and eventually the EU.

Turkish analyst Cemil Ertem stresses, “just like TANAP, the BTK Railway not only connects three countries, but also is one of the main trade and transport routes in Asia and Europe, and particularly Kazakhstan and Turkmenistan ports. It connects Central Asia to Turkey with the Marmaray project in Istanbul and via the Caspian region. Along with the Southern Gas Corridor, which constitutes TANAP’s backbone, it will also connect ports on the South China Sea to Europe via Turkey.”

Cry not for Turkey, she is in the right place at the right time.