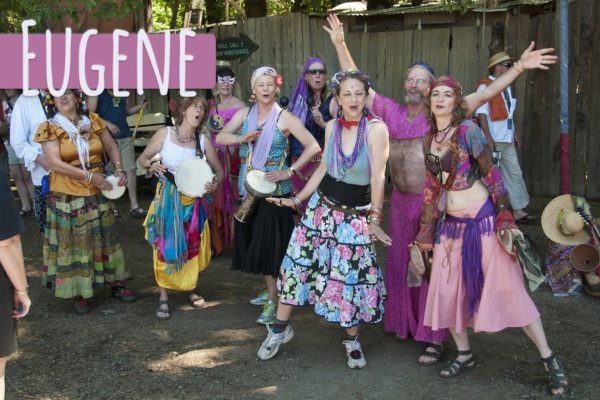 The Hippies Are Feeling the Bern

Eugene, Oregon is the hippest hippy town in America, I know because I bought 867 Tyler Street, located smack in the middle of flower-child land. Suburban sprawl, Wal-Mart, McDonald’s and Starbucks are dirty words. The University of Oregon is the economic heart and center of downtown.

Our councilman owned the local organic grocery store. I could buy a 100% organic tired-looking apple for a dollar or trudge three blocks over to Applebee’s and buy four shinny not politically correct apples for the same buck. One would never, ever, go to Starbucks for anything, that was for tourists, with the highest per ca-pita number of local coffee shops, why latte with an out-of-towner.

You needed a car to visit McDonald’s or the evil Wal-Mart store. Life in Eugene consisted of being a ‘Duck,’ teaching ‘Ducks,’ selling something to ‘Ducks’ and renting to ‘Ducks.’ Our plan was to convert the garage of 867 Tyler into a nice one bedroom “Duckling’ apartment. Our home was built in 1957 as a single family dwelling but the hippie city government rezoned the street as four unit properties. Suburban sprawl was a dirty word, so raising urban density standards did the trick in two important ways. 1) provided off campus housing for the 50,000 Ducks – our garage would rent for $600; 2) we spent $25,000 to remodel the garage with new sewer line, bath and kitchen. Combined the rental income and new construction inside the city limits increased Eugene’s GDP. A micro-example of what Bloomberg’s Justin Fox is saying:

“I have cited, again and again, the estimate by economists Chang-Tai Hsieh and Enrico Moretti that reducing regulatory constraints on housing to the national norm in just New York, San Francisco and San Jose would increase U.S. gross domestic product by 9.5 percent.” Pulling Up the Property Ladder to Keep the Young Off JAN 11, 2016 By Justin Fox

San Jose is about to go bankrupt because of Proposition 13 which froze property valuation at 1976 levels with only a 2% per year increase unless the home is sold. Homeowners don’t want to give up their residence that has quadrupled in price since 1976. There is no money for police, fire and city employees. There is no money for maintaining infrastructure, let alone improving conditions. Home to Silicon Valley corporate headquarters, San Jose has no affordable housing inside the city limits.

Why Toronto and Portland Work

In 1953, the city itself was doing just fine, but the 12 smaller municipalities surrounding Toronto were struggling to keep up with their postwar sprawl. So the province of Ontario imposed a metropolitan government over the entire region to handle big, costly projects: policing, water and sewer systems and major roads. Each of the cities, still run by their local councils, paid into the kitty according to their tax base assessments. Toronto, which had 57 percent of the population, paid 62 percent of the metropolis’s bills.

The system certainly had its problems, but it made common cause between the suburbs and the city center. But the rapid rise of suburbia swiftly reversed that cash flow. Just nine years later, Toronto made up just 38 percent of the metropolitan area’s population and it contributed 44 percent of its budget.

The system was tweaked over time, and the number of municipalities consolidated to six. Then in 1998, the provincial Progressive Conservative government (including Doug Ford, Rob’s father), forced the amalgamation of all six cities into a single large unit.

While other cities in the United States eventually formed metro governments, only Portland, Ore., has followed Toronto’s model and elected a regional council. This is one reason why Portland, two hours north of Eugene, has been voted as the number one quality of life city in the US.

Obama in 2008/12 got 80% of the vote in Eugene. The hippies are ‘Feeling the Bern’ even more than when they worshiped the ‘O.’ Bernie Sanders not only clarifies the problems he educates us all to his democratic socialist solutions. The Oregonians have been practicing what Bernie has been preaching.