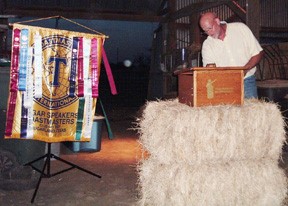 Toastmasters Is for Lovers

“The greatest gift one can give to another is to reveal himself,”  – Aristotle.

“Speaking in public is all about revealing oneself,” – teg.

Toastmasters opened membership to women in 1973 but today North American Toastmasters are still 80% male and average 47 in age. Toastmasters came to Mainland China in 1999 with flipped stats that favor women, 80% of the membership, 24 years old average and not an ugly one in the bunch. The explosive growth of Toastmasters in China reflects everyone’s burning desire to speak English and women do an 80/20 better job at second language acquisition than men.

Aristotle’s UTILITY is actualized in over 15,000 clubs in 130 plus countries because of its mutually supportive audience of like-minded individuals helping each other get better at communicating with one another. The PLEASURE of honest friendship blooms in successful meetings that foster a structured non-threatening environment for self-improvement. Everyone has a VIRTUOUS side but until it is revealed to others it is as silent as the fallen tree in the forest.

Getting to know one another after high school, or in college becomes ever more challenging in the world of work. Siren, an ENT doctor, manned-up to reveal his true self in Middle Kingdom Toastmasters by delivering the required ten speeches to the majority female audience. Gregarious Fisa made her presence felt from day one with her heartfelt speech performances. Over the course of a year and a half Siren and Fisa have realized the wisdom of Aristotle by forging their own virtuous character relationship. Toastmasters is for lovers.