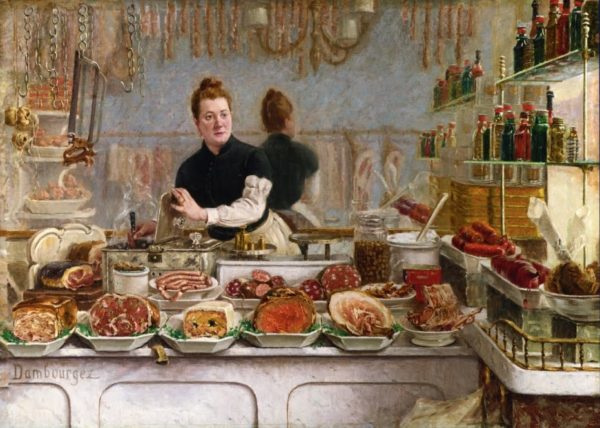 The War of 1812 concluded in 1815, and in the decades to come, the United States developed a vast transportation system, a national bank, and interstate trade. The economy blossomed, and canals, roads, cities, and industrialization expanded.

Two hundred years ago, the United States stood at the edge of a frontier — both literally and figuratively. So what was life like at that exciting time?

Almost all of this growth was due to high birth rates, as immigration was low in 1815, slowed by European wars that raged from 1790 to 1815. Only about 8,000 per year entered during this period. The 1820 census counted 8,385 immigrants, including one from China and one from Africa.

Food: Because these innovations in transportation were still in their infancy in 1815, however, most Americans ate what they grew or hunted locally. Corn (no GMO) and beans were common, along with pork. In the north, cows provided milk (raw), butter (raw), and beef, while in the south, where cattle were less common, venison and other game provided meat. Preserving food in 1815, before the era of refrigeration, required smoking, drying, or salting meat (no nitrates). Vegetables were kept in a root cellar or pickled.

For those who had to purchase their food, one record notes the following retail prices in 1818 in Washington, D.C.: beef cost 6 to 8 cents a pound, potatoes cost 56 cents a bushel, milk was 32 cents a gallon, tea 75 cents to $2.25 a pound. Shoes ran $2.50 a pair. Clothing expenses for a family of six cost $148 a year, though the record does not indicate the quality of the clothes.

Life Expectancy: The boom in native population in the early 19th century was even more remarkable considering the low life expectancies of the time. By one estimate, a white man who had reached his 20th birthday could expect to live just another 19 years. A white woman at 20 would live, on average, only a total of 38.8 years. If measuring from birth, which counted infant mortality, life expectancy would have been even lower. A white family in the early 19th century would typically have seven or eight children, but one would die by age one and another before age 21. And, of course, for slaves, childhood deaths were higher and life expectancy was even lower. About one in three African American children died, and only half lived to adulthood.

Disease was rampant during this time. During the War of 1812, which concluded in 1815, more soldiers died from disease than from fighting. The main causes of death for adults during this period were malaria and tuberculosis, while children most commonly died from measles, mumps, and whooping cough, all preventable today.

Housing: More than four out of every five Americans during the early 19th century still lived on farms. Many farmers during this time also made goods by hand that they’d use, barter, or sell, such as barrels, furniture, or horseshoes. Cities remained relatively small and were clustered around East Coast seaports: New York, Philadelphia, Baltimore, Boston, and Charleston, South Carolina. In the 1810 census, New York, the largest, was home to 96,373 people. By 1820, the population would reach 123,706.

Employment: Industrialization would soon accelerate urbanization. In England, the Industrial Revolution had begun in the mid-18th century, and despite attempts made to restrict the export of technology, in 1789, a 21-year-old Englishman memorized the plan for a textile mill and then opened a cotton-spinning plant in Rhode Island. By 1810, more than 100 such mills, employing women and children at less than a dollar a week, were operating throughout New England. By the 1830s, textile production would become the country’s largest industry.

Wages for other industries during the time ranged from $10 to $17 a month for seamen. Farm laborers after the end of the War of 1812 earned $12 to $15 dollars a month. A male school teacher earned $10 to $12 a month; a female teacher earned $4 to $10. In Massachusetts, a tailor and printer could both expect to earn $6 a week, while a servant might earn only 50 cents a week.

Transportation: Industrialization affected the country in other ways, of course. In 1815, there were no steam railroads in America, so long-distance travel was by horseback or uncomfortable stagecoach over rutted roads. Cargo moved by horse-team was limited to 25-30 miles a day. But in 1811, Congress signed a contract for the construction of the National Road, the first highway built by the national government. By 1818, it had crossed the Appalachian Mountains, fostering westward expansion.

In 1815, Americans were also discovering steamboat travel. In 1807, Robert Fulton had opened the first steamboat ferry service, between Albany and New York City. By 1815, advances in technology allowed a rival to ferry arms and ammunition to General (later President) Andrew Jackson at the Battle of New Orleans, the last battle of the War of 1812, and then to steam back up the Mississippi and then the Ohio to Pittsburgh, proving the feasibility of steamboat navigation of the mighty river.

Entertainment: For recreation, horse racing became increasingly popular by the time of the War of 1812. Singing and sheet music became widely popular, particularly “broadside songs,” or lyrics printed on a sheet of paper and sold for a penny. The sheet had no music, but instructed the purchaser which popular, well-known tune the words could be sung to. The songs often had to do with current political or military events. At the other end of the artistic spectrum, the Boston Handel and Haydn Society, formed in 1815, performed Handel’s “Messiah” in its opening concert.

Finally, singing played a large part in one of the most significant social movements of the time — and in all of America’s history — the Second Great Awakening. From 1790 to 1830, wave after wave of Protestant evangelism swept across the country. Tens of thousands of people would attend a single camp meeting, marked by enthusiastic preaching and audience singing and participation. These more informal services, led by itinerant preachers, also helped tie settlers on the Western frontier to the cultural life of the rest of the country. The Second Great Awakening also fostered greater participation by women and African Americans, who continued developing their artistic traditional of spiritual music during this period.