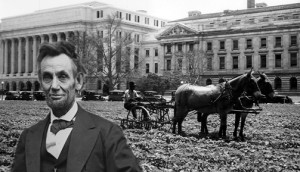 Lincoln was a frontier farm boy through and through. From a one-room log cabin in Illinois, first on Sinking Springs Farm and then Knob Creek Farm, he ending up transforming the American agricultural system with the founding of the Department of Agriculture, establishment of the Land Grant system, and passing of the Homestead Act.

When the Republican Party nominated Lincoln in 1860, two of the planks in the party platform were in accordance with ideas that had been advocated by westerners for many years. The first was the demand for a homestead measure. The second was advocacy of Federal aid for construction of a railroad to the Pacific Ocean. Two other proposals which had been advocated for many years — grants of Federal land for founding of colleges to teach agriculture and engineering and the establishment of a federal Department of Agriculture — were not mentioned in the platform. However, all four of the proposals were enacted into law in 1862.

The Homestead Act, approved by the President on May 20, 1862, provided for giving 160 acres of the public domain to any American or prospective citizen who was the head of a family or over 21 years of age. Title to the land was issued after the settler had resided on it for five years and made improvements on it. The settler could also gain title by residing on the claim for six months, improving the land, and paying $1.25 per acre. The Homestead Act did not achieve all that its proponents had hoped, but it stood as a symbol of American democracy and opportunity to native-born and immigrant alike.

The Morrill Land Grant College Act, donating public land to the States for colleges of agriculture and the mechanical arts, became law on July 2, 1862. Every State accepted the terms of the act and established one or more such institutions.

Lincoln’s appointed head of the Department of Agriculture, Isaac Newton, (He is best remembered as one of the founders of the National Grange) outlined objectives for the Department. These were: (1) Collecting, arranging, and publishing statistical and other useful agricultural information; (2) Introducing valuable plants and animals; (3) Answering inquiries of farmers regarding agriculture; (4) Testing agricultural implements; (5) Conducting chemical analyses of soils, grains, fruits, plants, vegetables, and manures; (6) Establishing a professorship of botany and entomology; and (7) Establishing an agricultural library and museum.